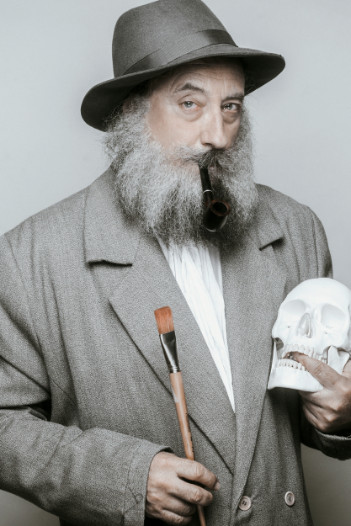 BA in Dramatic Art from the Institut del Teatre de Barcelona. He was a member of the La Gàbia theatre company in Vic (Barcelona) both as an actor and assistant director.

He has been with Els Joglars since 1983 with whom he has taken part in several performances of Albert Boadella’s plays in theatres around Europe, Latin America and the United States.

Since December 2012 he is director of Joglars, replacing Albert Boadella in position.

He took part as an actor in the following plays of Els Joglars directed by Albert Boadella:

He was leading actor in:

He took part in the Els Joglars television series directed by Albert Boadella:

Author of the books Tres pies al gato, diario de un actor (Publications 62, 2001 and Muchnick Publications, 2002) in which, through an engagement book, he narrates his individual and rural manner of building characters to handle the profession of being an actor.

In March 2008 the publishing house Editorial Columna published Hoja de ruta (Waybill) (a provisional title) of his first book of fiction, a novel about royal characters who, due to their special character, live outside the dictates of society.

At the present time together with Albert Boadella, he is writing a book that expresses through the vision of a playwright and an actor, the unusual and gratifying vital experience that represents the lasting and prolonged existence of Els Joglars.

With Els Joglars he has received several national and international awards, outstanding among which are: