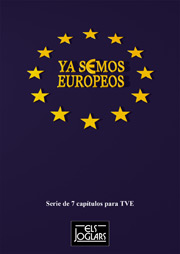 Ya semos europeos is a comedy series of seven 30-minute long episodes. The idea for this series arose out of Spain’s entry into the EEC.

On a TV set, by means of seven reports, the reporter Albert Boadella presents us with a radiography of Spain. With a large dose of irony, sarcasm and cynicism, combined with an immense creativity in the presentation, an analysis is made of the situations in which a Spain increasingly close to Europe finds itself.

Parodies are offered of themes like: the Single European Act/Treaty, the uniformed professions, unemployment, the treatment of animals, 1992, quiz shows or the workings of communications in the country.

Ya semos europeos attracted an audience of 6 million viewers when shown on Spanish Televison’s TV2.