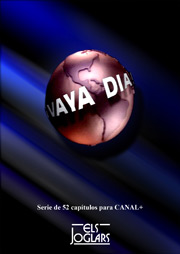 ¡Vaya día! was a section of the programme Lo más Plus presented by Máximo Pradera and Fernando Schwartz. Other sections of the programme were Primer plano (Close-up), magazine of cinema news, Zapping, the best of other TV channels, La telefonista, with the actress Chus Lampreave attending the invented phone calls from TV viewers giving their opinions, El BOE and Casting.

¡Vaya día! is an ironic spoof on a news broadcast dealing with Spanish and international socio-political news, that takes as its starting point the idea that reality habitually surpasses fiction.
The ‘news’ lasts approximately five minutes and is presented by Albert Boadella.

¡Vaya día!, just like any news programme has an informative structure, with sections on national politics, international politics, society, sport, the weather, cultural recommendations, etc. Special emphasis is given to those items of news that attract little attention because particular interests manage to stifle them; in a word they show the darker side of different spheres such as Parliament, health, the swearing in of public officials, the latest dispositions of the Real Academia Española de la Lengua or the process followed in canonising a beatus.

The technological challenge of offering weather information directly from the Meteosat satellite has also been met.
The cultural recommendations set out to bring to the public as a whole those events that, for their exceptional interest, constitute the pillars on which our millenary culture is sustained.