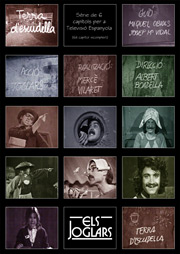 Terra d’escudella (literally ‘The Land of Catalan Stew) is a children’s television slot that went out on Saturday mornings in 1977.

Els Joglars were responsible for six episodes, taking over from the Comediants who started the series.

Els Joglars recalled episodes from history, like the particular vision of childhood of King Jaume I, presented through games, adventures, etc. History is brought closer to children through play. Els Joglars represent a group of boys and girls from a particular neighbourhood who play out a historical situation. Children learn about history by participating in its re-enactment, reincarnating the characters and situations.