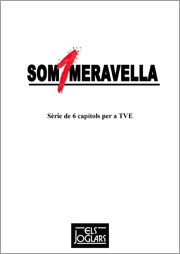 Each episode deals with a particular Catalan theme that might be considered as a blind spot in the working of Catalunya.

The title Som 1 meravella, a parody on “som 6 mil·lions”, a slogan used by the Generalitat de Catalunya, marks the story line. The series deals with themes that are never presented in a negative way, but rather as remarkable, original and of international importance. To introduce Som 1 meravella the same graphic is used as that in the official campaign of the Generalitat.

Each episode is presented as a documentary report. Albert Boadella plays the part of an anxious reporter and the actors from Els Joglars, each playing many roles, develop the fable, conferring on the documentary an air of credibility despite the sarcasm inherent in the situations presented.

Some of the subjects dealt with are unemployment, pollution, public and private education, nuclear energy, the petrochemical industry, nationalism and poverty.

When shown on Spanish Television’s TV2 the series attracted an audience of three million viewers.