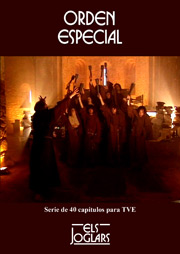 Orden especial is a parody of an American cop series, but, if in these series it is the Police Commissioner who orders the arrest of the criminal, in Orden Especial it is the Abbot, a member of a 20th century religious order who doles out justice, as he understands it, using far less orthodox methods than those used by the Very Holy Inquisition.

From a computer centre installed in a monastery and equipped with highly sophisticated audio-visual equipment, it is possible to detect and follow those individuals who, though behaving in ways which cannot be considered illicit by any means, are nevertheless considered to be a public nuisance

Once the guilt of these characters is considered proven, the Abbot, with a cry of “¡purgandis populus!”, orders his monks to determinedly pursue the boring, the hysterical, the opulent, the sports journalists, the Opera divas, the know-it-alls, the show-offs, the fascists… in order to detain them in ‘Holy Office Psychiatric’, a kind of hospital where they will be submitted to very harsh forms of therapy which will allow them to be reintroduced into society. Some will emerge to change their profession, but others will not survive the therapy.
In this way, and at a hectic pace, a puritan is redirected towards ‘X’ rated cinema, a dadaist painting ends up in the rubbish, a group of designers are submitted to the therapy of public humiliation in front of their own creation, a great footballer is sacked and sold, retail, in a shop.