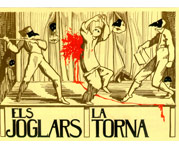 “Torna”: The quantity which you hand over to a person who has acquired something from you at a price greater than its worth. When a product sold doesn’t exactly match up to its indicated weight, the ‘torna’ is what is added to complete the said weight.

On the 3rd May 1973 Puig Antich and the Pole, Heinz Chez were executed in Barcelona and Tarragona, respectively. Of the first much has been said and continues to be said, given that he was a political prisoner. Heinz Txez, however, died shamefully, branded with the stigma of being a common criminal. In any case, the paradoxical part was that his execution had political ends, constituting the torna of the execution of Puig Antich with the result of disorientating public opinion predisposed, at that moment, to confusing the terms ‘political activist’ and ‘common criminal’.

The pathetic life of Heinz Chez is practically unknown, even to those who dealt intimately with him. According to his trial, Heinz was an enigmatic man of whom we know very little. His own account of his life tells of the death of his parents during the war when he was five, his internment in a children’s concentration camp, his profession as a street comedian to earn a living, his solitary wanderings across diverse countries until the day he shot a civil guard dead in a camp in Tarragona.

Neither before nor after his execution was anyone found to have known him, not even a family member or friend. He was, without a doubt, an authentic loner who went to the vile garrotte without anyone knowing anything about his character or conduct (even his name could have been false).

This performance has been created as a free interpretation of the events, with two specific aims; a homage to the street comedian Heinz Chez and as a reminder of one of so many injustices committed in the name of the law, a law which trusts that time will bury the past.

We don’t intend it to be a tragedy but a grand comedy of masks, just as Heinz, from both the events and people surrounding him, must have seen it in the end, given that he didn’t know the language, customs, laws or legal rights of the Spanish state.

We wanted to present the performance with simplicity, in both visual and narrative elements, because some of the scenes depict real events.