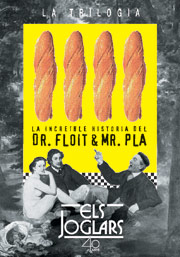 All references to the Mediterranean immediately set off a symphony of topics where leisure and sensuality lie between pines which border a furiously blue sea. To avoid this overload of recreational poetry it’s always necessary to specify to which Mediterranean we are referring, the people where I live are neither leisurely nor especially sensual and the pines have given way to boorish urbanisation bordering a sea which gets more and more polluted each day. My people are infected by a schizophrenia between blatant materialism and uncontrolled sentimentalism, that is, an obsession with their country but also its shameless pollution. This duality extends to doubts about identity, language or the love-hate relationship with neighbours, all of which make up their particular characteristics, which are also the causes of general satisfaction. It’s a corner of the Mediterranean where the majority of inhabitants undergo immediate transformations like Dr Jekyll and can pass from the sublime to the rude, from feeling repressed to libidinous, from being introverted to pedantic, from the creative to the imitative and from collaborators (collaborating with the enemy) to patriots. All in all these reactions aren’t distinct from the rest of the National Theme Parks where attractive personalities such as these can also still be found in furious decline, incoherent individualists far too impractical for coexisting in an organised and precautionary Europe, maybe because these Spanish races have a unique characteristic in common, militant individualism, which is no mean thing.

Josep Pla, from his little house in the Ampurdán area, produced an exceptional description of all this chaos, transforming the local narrative into something universal. This makes him, not only a great reminder of our recent past but also the philosopher, who through his positive scepticism, gave us the clues for coexisting peacefully in a climate of contradiction. His simple description of some grilled sardines from Cadaques, tasted on a deserted beach, takes us to the highest metaphysical aspiration of the moment, in other words a vitally important action for coping with our digitalized future in a balanced way. Nevertheless, in spite of our resistance these shades of culture may be engulfed by the new millennium, just like the countrysides, countries, traditions and the pride of being different. All personal obsessions have a price to pay and no one will be moved by ‘La Dona d’Aragó’ in they way the leading actors of the play are. Maybe it’s a shame, but if the new directives from Brussels stop the genocide among Europeans, the XXI century will be welcomed despite the cost of a certain degree of cloning.

Meanwhile, as I am a man of this century, individualist and contaminator, contradictory and fervent, a fan of Pla, I can’t do anything but ‘La increible historia Dr. Floit i Mr. Pla’ What can we do! I too will be engulfed by the year 2000.

It’s difficult to sum up these last 36 years, the most passionate moments, the most intense or funniest ones. The company archives built up during this time is a testament not only of a theatrical trajectory but also of the companies social involvement which has often characterised our plays, a fragment of the country’s history.

Maybe our last few years haven’t been so militant (some have written us off as lost cases) but instead we’ve managed to achieve a solid methodology which we didn’t have before. Attacks, at times from all sides, didn’t affect our dedication to the essential objective of the stage. This is why I dare to see recent times as the achievement of a certain utopia, in our way of working, relationships and mutual respect and love which has been consolidated over the years.

We’ve lived by creating the theatre that we’ve wanted, practising a shamelessness and cheek that have saved us from plenty of ulcers, and we’ve enjoyed seeing how we’ve caused a few ulcers in a few arrogantly powerful figures. We’ve also suffered in solidarity, which, without a doubt is a more pleasant form of suffering. We haven’t had to be servile to ‘the men in charge’ and so we’ve been able to laugh when refusing millionaire prizes or parodying our faithful critics. We’ve enjoyed a large audience which has always been generous and enthusiastic, the authentic key to our survival. What more can one ask? Maybe someone could object that I’m not being modest enough by writing these lines, displeasing those who haven’t had such good fortune. Frankly, that hasn’t been my aim. These intimacies are publicly disclosed as proof of the possibility of the existence of a rigorous, lasting, passionate, transgressing and profitable project, without the need to resort to the professional indignity which invades the greater part of our field nowadays, turning us into a collective of beggars.

Anyway, many professionals have contributed to this company with generosity and effort. I remember each one of them, even the tiresome ones – we have suffered from a few – but luckily distance makes the heart grow fonder, Nevertheless, I wouldn’t be writing these lines if it weren’t for the loyalty and talent of Jesús Agelet, Jordi Costa, Lluis Elias, Josep Maria and Ramon Fontserè, Pilar Sàenz and Xevi Vilà who have been my closest partners over the last 15 years. They are ‘Els Joglars’