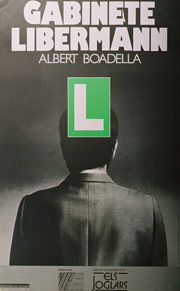 CASE STUDY
Of the case of reprogramming a couple with extreme confinement syndrome, the”Malampiá” case, in 25 sessions of the public therapy.
Documentation corresponding to the NINTH SESSION

Clinical history of the “Malampià” case

Marisa M. and Javier Z. spent 5 years without leaving a 30m3 apartment, where members of their group more or less periodically passed them vegetarian food through a trapdoor in the window. Due to the persistent complaints of the neighbours about nauseating odours, as well as the proliferation of strange insects in the surrounding buildings, the court’s intervention was decided upon, backed by the Ministry of Public Health.

Although their physical health hadn’t suffered from any great damage their psychological profile seemed much more serious. They could hardly speak, uttering only a few unconnected words and instead they had developed a reduced range of gestures which they repeated obsessively. Marisa exhibited some wounds in the nape of her neck probably produced by Javier’s bites during their sexual relations, which they carried out via the anal channel, probably as an instinctive defence from procreation. They probably spent a great deal of their time searching for parasites on each other’s bodies. They also seem to have been heard vocalising some kind of reiterative song accompanied by the monotonous drum of objects on the floor and walls. Some of these habits persisted after the end of their confinement, especially the ones representing religious manifestations.

Our first visual diagnosis is that we are dealing with a serious case of social deprogramming at it’s worst, which makes us dread that as a result of the total disappearance of defences from the exterior world, the slightest conflict would lead to irreversibility in the process of psychic recuperation. For this reason it was decided that Marisa and Xavier be urgently transferred to our clinic and isolated from any external communication.

The first contacts were nearly all unsuccessful, mainly due to their obsession with returning to their little ‘love shack’ ‘Malampiá’, the name they gave to their habitat. This nostalgic behaviour provoked a general hysterical rejection of any person, be it doctor, nurse or family relative so we decided on even greater isolation in which my assistant and I became their only contact with the outside world, carrying out their initial therapy and simulating, if necessary, a variety of characters in order to initiate relations with them.

Our first study was mainly establishing the processes which had led them to their current situation. Their family profiles didn’t show any irregularities worth mentioning, their respective parents being what we would call members of the intellectual elite. Indeed, Javier’s father was a professor of Political Science and his mother was a sociologist.

Marisa and Javier became emancipated at 14 and 15 years old respectively, each maintaining sexual relations with different people up to then. From the day they met at the Faculty of Philosophy they were bound together in a dependency that bordered on neurosis. Together they formed identical attitudes of rejection towards the society that surrounded them, which they didn’t understand and so wanted to live apart from its absurdity. As is the norm in these cases they sought refuge in marijuana and from time to time harder substances, without reaching states of complete dependency.

Their physical appearance at that time exhibited a state of abandon and evident rebelliousness against hygiene and personal cleanliness. They took part in theatrical performances where they destroyed cars and painted their bodies with colours. They are loyal fans of the Rolling Stones, the Police and Walton Thames.
Their contact with society wasn’t just a bitter experience of misunderstanding but violent rejection by adults. This induced a withdrawal within themselves which became more and more marked. For long periods of time they sought refuge from the world in apathy, disillusionment and evasion, finding great pleasure in inactivity. Their voluntary confinement beginning in 1980, is nothing less than a progressive process of isolation, at the same time putting into practice the theories formed by the group-sect they belong to. Carles D., another member of the sect, tells us their maxims “The others are mad. They pursue absurd aims which we don’t understand. Words are no more than a manifestation of hypocrisy. We have to return to simplicity. We have to retrace the mistaken path of humanity and return to the primitive. In everything which today is considered anti-social there’s true liberty. Progress is genocide. We have to let it go.”

The Reason behind a Public Therapy

I always detested the dirty anonymity of the consultancy and couch. Everyone knows that the therapist is thoroughly psychoanalysed and that this process never ends. For this reason I psychoanalyse myself constantly with the public, from whom I receive such relaxing and beneficial sensations which enable me to work with greater precision.

My great passion for theatre was the unravelling of a method which has led me to investigate more thoroughly the roots of psychodrama and the lack of cathartic elements in traditional psychodramatic therapy. It’s no secret that an actor grows up in front of his public, and in doing so gives more to his public and vice versa.

By investigating the psychic benefits from the confessions of the public, I also discovered, the importance of the spectator, in certain therapies, who acts as a ‘reinforcer’ for both the patient and psychiatrist. In other words, if 20 people admire me and desire me at the same time, the success of my management will generate an energy of such power in the patients that the result will be incredibly good and extraordinarily quick.

I can also confirm that the public love to see a psychiatric session in progress, where they can satisfy their morbid obsession with the abnormal and sordid and in this way feel healthy in themselves compared to the patient. The symbiosis of public-patient-therapist will form the perfect triangle in which each element will benefit from their interrelationship with the others.