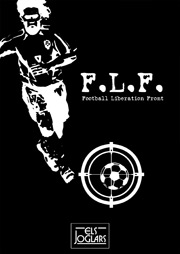 F.L.F. is a documentary-style drama made for TVE, a pilot programme for a future series of 13 episodes in which each was to be a report dealing with an international subject. The idea was to use the factual form of the report to tell a lie (loaded with irony) and in this way avoid the creation of a critical image regarding particular facts.

F.L.F. Football Liberation Front is an organisation that publicly accuses football of being corrupt. The programme is like a documentary with real images and others that were specially shot. The organisation, which like all purists advocates violence, proposes various solutions to put an end to the corruption: pitches with three goals, the democratisation of the spectators, etc.