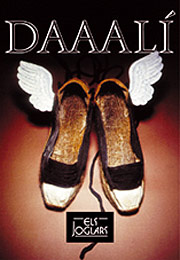 Premiere the 10th september 1999 at Teatre Jardí in Figueres (Girona), city where Salvador Dalí was born.
Shown until 16th september 2001.

Dalí lived-out every man’s secret dream: to remain a child during his whole life. From a very early age he understood that a child’s impunity with its wild imaginings and exciting mysteries made up the universe he needed to retain in order to avoid the constricting conventional reality of the adult world.

His early intentions met with success and Dalí even managed to die a child, playing sadistically with death, prolonging his suffering for years in order to contemplate, both curious and fearful, the reaper’s face. This unique artist’s surreal vision of reality was not the result of an intellectual process but rather the consequence of his particular vision of life; his work, his ruthless spontaneity, his erotic leanings, his relationship with García-Lorca or his love for Gala, the wife-mother figure, reveal the authenticity of an enormously creative existence based on constant play. His enormous ability to seduce his public was probably therefore a direct result of the theatricalization of his compulsive individuality which obviously resulted in catharsis with the masses.

Dalí did not like to be considered either “good” or politically correct, he loathed bourgeois good taste and the arrogance of the intellectual elite who counter-attacked by relegating his enormous lucidity to the realms of madness and commercialism, and on many occasions also slanderously fabricated supposed flirtations with fascism. The reasons for this can doubtless be found in Dalí’s outright militancy in the painterly tradition of figurative mysticism and also the bitter irony which he directed towards the avantguard movements and some of their major idols who even today represent the untouchable taboos of the elite.

In order to counteract the sickly exhibitionism of pharisaic goodness which invades us, characters like Dali are of a vital, ecological necessity though sadly in the process of becoming extinct, for this reason we have synthesised the memory of intense hours shared in rehearsals with complete passion and partiality in this final delirium the title of which is the word he most liked to pronounce: DAAALÍ.

Our thanks to Antoni Pitxot, painter and friend of Salvador Dalí, for his collaboration