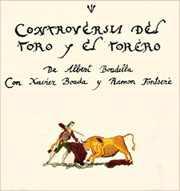 Premiered the 5th December 2006 at Casa de América in Madrid.

For or against? Only a few decades ago, this question was still being put to the customers of the barber’s shop. As well as the grooming and shaving service, the barber offered to lead the conversation as sparring partner or flatterer. This might have been a household derivation from the old controversies of the 15th to 18th centuries in which the contenders each defended diametrically opposed opinions. The arguments might deal with everyday themes (dispute between water and wine), moral themes (the morality of the theatre) or religious themes (dispute between the soul and the body), thus under such elementary models, innumerable controversies originated between two opposed arguments.

As is natural, there cannot be theatre without conflict, and in our interpretation today, the drama dispute turns to its fundamental protagonist-antagonist structure. So we have suppressed any derivation of the argument that is not strictly the essential dispute: just words and the presence of the contenders.

The debate about bullfighting is prominent amid recurrent controversies. It has been so for centuries, not only between countries that practice bullfighting rituals but also in others that denounce it because of the supposed mistreatment of animals. The present-day increasing tendency to protect animals, however, now adds greater virulence to the traditional argument.

Nonetheless, bullfighting has for centuries resisted the numerous endeavours to have it suppressed. It has survived all of the counter-attacks unscathed, consolidating itself as a first-rate artistic language so that today it continues to be the second language that Spain has in common with South America. The cultures of Spain and South America are interwoven not only by the language but also by art. This is something that brings us closer together. It is precisely this large bullfighting family extending over the two continents that has consolidated the establishment of bullfighting. But if it is to survive in the future, we aficionados should not give up the debate, and rather than radically rejecting the anti-bullfighting arguments, let us also be capable of understanding the reasons for opposing bullfighting. Only by accepting that the existence of the bullfighting ritual is above its inevitable calamities will we persuade modern society to understand the importance of conserving this art.

This is what this controversy is about.

Albert Boadella
(In memory of my dear friend,
the matador Manolo Vázquez)